Whose Hand is That?

On the sands of Brava Beach, more precisely in a spot called Parada 4, a giant hand made of stone emerges from the core of the Earth. Whose hand is it? 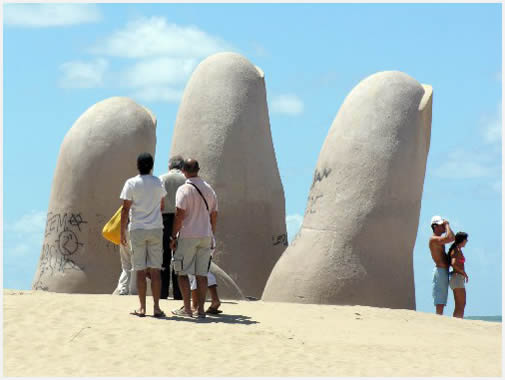 As every summer, visitors to Punta del Este cannot help wondering why a hand. Whose hand is that? What for? When?

The Hand, as it has come to be popularly called, is a plastic work standing here since the summer of 1982, when the Chilean artist Mario Irrazábal was invited to take part in the 1st International Meeting of Modern Sculpture in the Open Air held in the City of Punta del Este. During that summer, the seafront turned into a kind of outdoor workshop where artists from various countries gathered and began to give shape to what they had in mind. 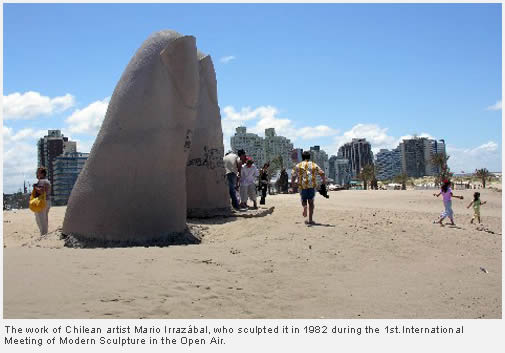 A Chilean in Punta

Mario arrived in Punta with a scale model and he had to improvise the rest of the process while facing natural obstacles such as the wind and the sand. Nevertheless, it took him only one week to complete his work in a breathtaking environment.
Though it might lose part of the charm it has today, we may say that the fingers in this colossal hand were made with steel bars covered with a metal mesh and a material resistant to the passing of time and the braveness of the sea. Today, the hand of this Chilean friend has become an icon in the City of Punta del Este. 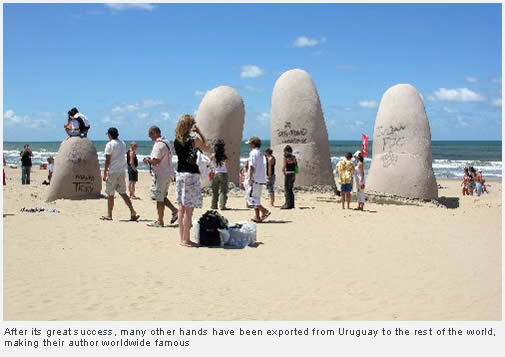 Photographed by thousands of people and one of the favorite postcards at the time of getting a souvenir, the hand has reached our days safe and sound.

It has even remained standing in the strong Southeast wind. However, it could not escape from graffiti poetry on its long fingers.

After its great success, many other hands have been exported from Uruguay to the rest of the world, making their author worldwide famous. Parada 4 at La Brava is the geographical landmark where this simple but interesting story began. 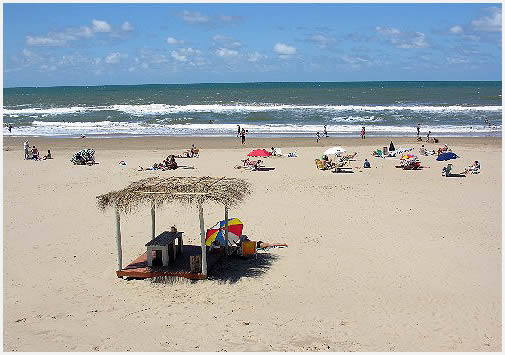 The Hand stands at Parada 4 on Brava Beach, only minutes away from the center of Punta del Este. Being photographed next to it is a must in order to prove you have been to Punta del Este.

« Back to Outings in Punta del Este