When the River Bonds

The hydroelectric dam of Salto Grande is the first work of integration in Latin America. We highly recommend visiting it. 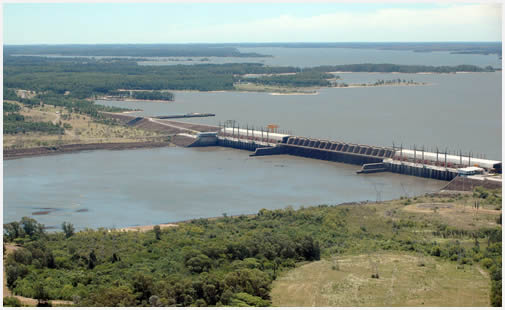 This construction of multiple use of the Uruguay River was developed by the Governments of Argentina and Uruguay with the aim of generating electric energy while caring for the environment. At the same time, the bond between two nations of the Río de la Plata that have a common past and destiny was renewed this time with earth, stone and cement.

At present, a tour has been organized around the area. Part of the facilities of the dam can be visited and the process of the construction, the energy produced and the general functioning can be learned.
The dam is located in a spot called Ayuí, about 13 kilometers North of Salto and about 18 kilometers from Concordia, Argentina.
The proximity to the place made us interested in visiting that reinforced concrete mass and without hesitating we headed in that direction. 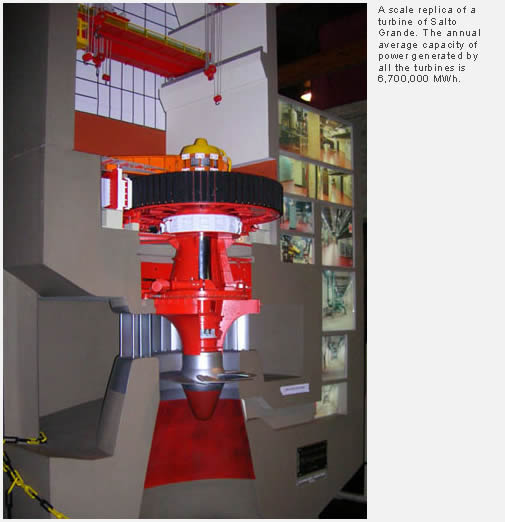 Once at the dam, we were invited to watch a movie that summarized the most important historical moments in the construction of the dam. That is how we learned that in 1946 Argentina and Uruguay signed an agreement for the exploitation of the Uruguay River, thus creating the Salto Grande Joint Technical Commission.

In 1974, the Mixed Commission gave the order to start the construction. At this point more than 4500 workers arrived in the venue to work non stop. In 1979, the huge damming and the first of the fourteen turbines began to work generating electric energy.

In 1982, the international bridge was opened and it enabled to join, for the first time in history, the railways of Argentina, Uruguay and Paraguay. It became the third bi-national connection apart from the existing bridges between Paysandú and Colón and Fray Bentos and Gualeguaychú (Unzué Port). Finally, in 1983, the last hydro generator began to work and the dam was officially opened, since it began working at 100 percent. 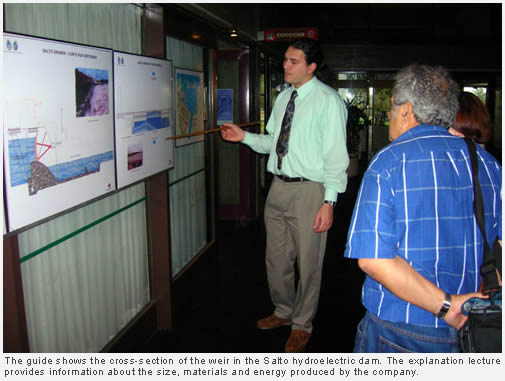 It is worth mentioning that since the dam began to operate, Argentina and Uruguay have saved about 120 million dollars per year. In the event that Salto Grande did not to exist, that amount would be spent on oil.
After the entertaining movie, we were led to a room to see the replica of a turbine of Salto Grande built to scale. Our guide told us about the size, the materials used and the energy produced by the dam.

That way we learned that a wide and safe transmission system takes the energy produced in Salto Grande to the consumer centers. The length of the lines is of 748 kilometers on Argentinian soil and 476 on Uruguayan soil. The annual average capacity of power generation is 6,700,000 MWh, which has gone beyond all expectations. 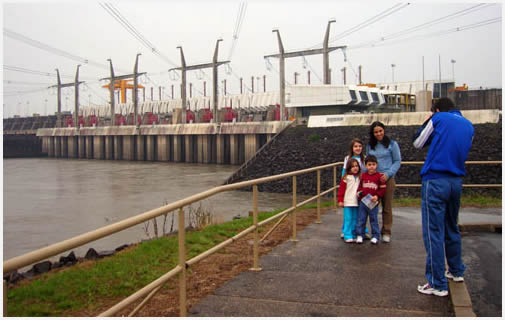 After the talk, we got on a shuttle vehicle owned by the dam which took us down on a tour around the viewpoints and the international bridge so that we could see the masterpiece in detail. As a result of this physical and energetic project of integration, a solid and real base of social and economic integration has been achieved between two brother countries like Uruguay and Argentina.

On your tour around Salto, we highly recommend a visit to the hydroelectric dam of Salto Grande, a symbol of bonding and pride of two nations that produce peacefully for life.

The access to the dam is located 13 km North of the city of Salto along Route 3.

The guided tour to the facilities of the dam is free of charge.