The Bulls in Real San Carlos

A few minutes from Colonia del Sacramento a wonderful treasure of bulls and bullfights can be discovered by any tourist. In order to understand it though, it is necessary to go back in time. 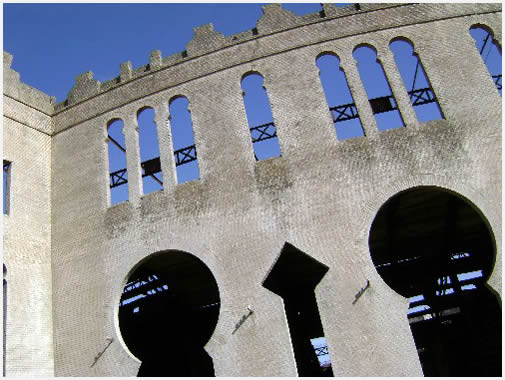 For many years, the Spanish and Portuguese people were involved in cruel fights to dominate the city. However, there was something bonding both parties, they had always felt attracted by the bullfights and the show they represented.

The construction of a tourist resort in 1908, which included a bull ring, was started by the union of Real San Carlos (the square was named after it). On its first day, January 9, 1910, the Uruguayan square dazzled with a gala that was equal to the most traditional festivals in Spain.

Famous bullfighters from the old world, like Ricardo and Rafael Torres ("the Bomb brothers) were the cream of the crop. The stadiums were packed with 10.000 spectators, most of them coming from the neighboring City of Buenos Aires and nearby Montevideo. The square was baptized with the name of Plaza Real de San Carlos and it had a short success. 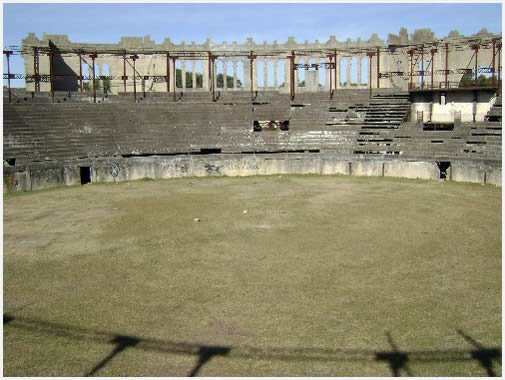 
Of purely Moorish origin, the square has a round arena, today covered by grass, and a grandstand that surrounds it and protects it with big horseshoe arches repeating themselves on its circular surface. Its Mudéjar architecture is the result of the blend between Muslim and Western expressions, typical of the Iberian Peninsula.

The bull feast attracted many spectators from the richest families, both from Buenos Aires and nearby Montevideo. They arrived in passenger steamships whose final destination was the pier Real San Carlos or the City of Colonia. The ship left them five blocks from the bull ring and there were wagons and carts taking the visitors to the gambling houses or to the very entrance of the ring. 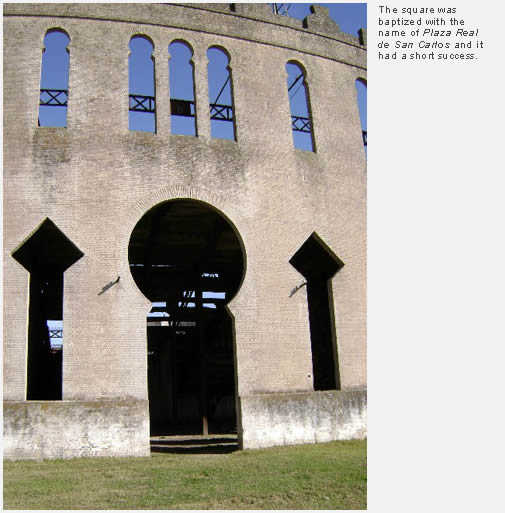 Some Argentinian investors based in Buenos Aires had the idea to build this venue. They had to negotiate with some Uruguayan businessmen, especially from the booming Montevideo of the time. As Argentina had been against these kinds of events, Uruguay became an important attraction for those who loved bullfighting.

The bullring was open for only two years and during this time there were 8 official bullfights. The last one to be recorded took place in February 1912. These kinds of events were banned in all the country by the Uruguayan government.

Ever since the prohibition became a law, the bullring, which in its glory could host the whole population of Colonia, was abandoned and only a few ghosts from those days keep bullfighting, running and bellowing just like they did in the past. 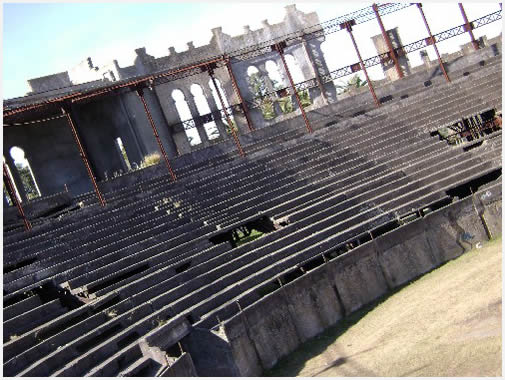 Today, the square is abandoned but it remains a tourist attraction nevertheless. A man in a black raincoat, who says he was a "bullfighter recalls the story and invites the tourists who are roaming around into the Plaza del Real San Carlos. Not only does he tell about the past but his stories also recreate the development of the bullfights. He explains where men, women and children, as well as the national and provincial authorities, were seated and, of course, the place where the bullfighter used to stand and "the gate" from which the big black bull used to make its entrance into the arena. Everything sounds true and real. At times, the line dividing past from present seems blurry. Those who listen can imagine that any minute the 9th bullfight, which has never taken place, can begin again between the big bull and the bullfighter.