For years, this has been the nude beach in Punta del Este. Specially created for many people who wish to find themselves free in an environment made up by the sea and the beach. 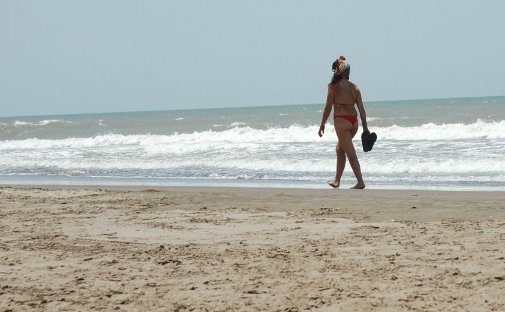 This place has nothing to do with the famous dog breed. Maybe the only thing in common with the animal is its size, so small that it makes it stand out from the rest. Located on Portezuelo Bay, in the outskirts of Punta del Este, Playa Chihuahua was one of the pioneers in South America to unveil concepts such as "nude" or "naturist" all along its meters of sand so that everyone could feel at ease ever since its beginnings.

Uruguay is known worldwide for this beach which features sand, sea, woods and is easily accessed by car. It lies just one kilometer away from the seaside motorway that joins Montevideo and Punta del Este Peninsula.

For years, Chihuahua Beach has had its followers and invited everyone to feel different. It is a call to open our minds to new ways of enjoying without prejudice, tolerating and respecting differences. Those conditions must be considered when we dare to visit this beach.

A Little Bit of History

At Chihuahua, what started out as a fashion became so natural that today it is a tourist attraction at Punta del Este, where nudism began to be practiced in the 1960s. In those days, the hippies and the sexual revolution appeared in various locations in the world. However, nudists used to be chased and sometimes apprehended.

After several judicial struggles, in 1994 Chihuahua was granted the legal status of AUDEN (Asociación Uruguaya De Naturismo) (Naturism Uruguayan Association), whose members have worked together with naturist people that visits Chihuahua with the aim of succeeding in making naturism look good before the rest of the community.

Years later, Chihuahua Beach was declared naturist beach by the City Council of Maldonado and the Uruguayan Tourist Office. Thus, it was decreed that the entire beach at Chihuahua resort should be optionally nude. This put an end to the prejudices and dictatorial thoughts of those who reject diversity. Moreover, topless was also authorized at many beaches in the District of Maldonado.

At present, this beach welcomes from 2,000 to 3,000 visitors everyday in the high summer season (January and February) and it is no longer the site where busybodies go to see what it is all about. It enables visitors to have a different experience, away from every prejudice and featuring more brotherhood with nature and ourselves.

Print this outing
« Back to Outings in Punta del Este