In the Lands of Tacuara

Before visiting the traditional attractions in the city, we went on a sightseeing tour in order to appreciate its architecture, its parks, its museums and its squares, and feel the hospitality of its people. 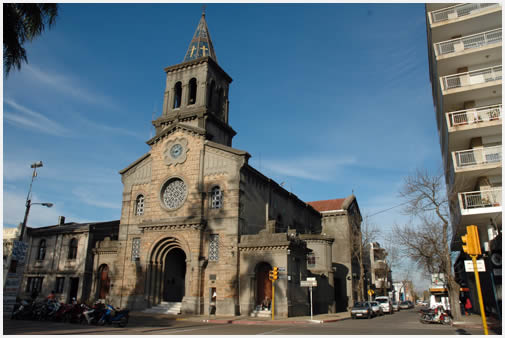 On October 24, 1831, a presidential decree passed by the then chief of state Fructuoso Rivera set forth the creation of a village in the region. The foundation task was commanded to the Presidents brother, Colonel Bernabé Rivera.
That was the origin of this city which came to be called Tacuarembó. Today, turned into a great metropolis, it looks forward to the visit of tourists who wish to see it for the first time.

Laid in the shape of a checkers board, with wide paved streets, it invites visitors to move around and discover its most attractive corners.
The tour starts at the city access through Route 5 and then left into Pablo Ríos Avenue, which leads directly to the center of the city. It turns right at the intersection with 18 de Julio Street, where everyone must get ready to behold everything Tacuarembó has to offer. 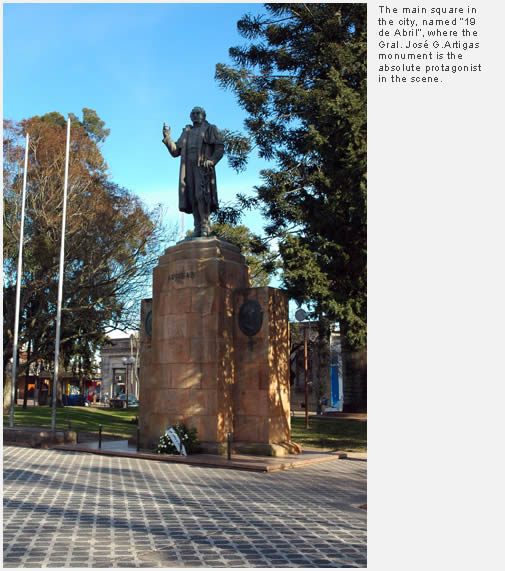 To the right, Cristóbal Colón Square shows off its thick tree grove inviting to rest and enjoy some refreshing mate. Following down 18 de Julio Street up to Artigas Street (where we turned right), there lies the Indian and Gaucho Museum. It presents the idiosyncrasy of these local characters, in addition to various objects such as mortars, arrow and spear points, boleadora stones, axes, daggers, blunderbusses, sabers, muskets, knives, chiripás (typical gaucho clothes), boots, rebenques (kind of whip) and many other objects representing the Indian and Gaucho cultures.

Returning to 18 de Julio Street and after touring along four more blocks, we found the main square in the city, named 19 de Abril, where the Gral. José G. Artigas monument is the absolute protagonist in the scene. We left the República and Comercial Banks buildings behind. 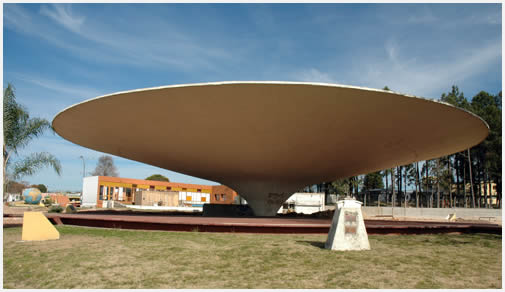 The majestic San Fructuoso cathedral rises right opposite 19 de Abril Square. Featuring a modernized Romanesque style, its interior measures 35 meters of length and 11 of width. The church includes a harmonic group of five altars, pulpit, confessional booths and cedar pews. We recommend visiting it. The Municipal Government Venue lies next to the cathedral.

Getting on along 18 de Julio Street for approximately three kilometers, the park surrounding Laguna de las Lavanderas (the Laundrywomen Lagoon) is reached. This is an ideal site to get away from routine and make full contact with nature. The Fiesta de la Patria Gaucha (Gaucho Fatherland Festival) is held on the shores of this water body every year in February.

Retracing our steps up to the main square, we turned right into Luis de Herrera Street and then left into 25 de Mayo Street, parallel to 18 de Julio Street. Two blocks away, we found the Tacuarembó Geological Science Museum. As we continued along that artery for about ten blocks, we came to another green space which lies opposite Bernabé Rivera Square, named after the founder of the city. 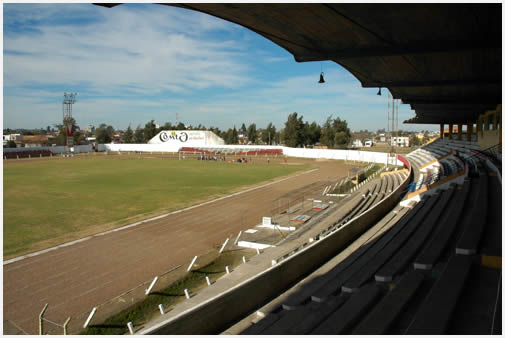 The tour continued following the same street four more bocks starting at the square up to the intersection with Manuel Correa Street, where we turned right and traveled six more blocks up to Centro de Barrio 1, where the constructivist murals made by artist Jonio Montiel at Torres García School may be observed.
To end the sightseeing tour, at the intersection of Manuel Correa and Presidente Oribe Streets, we recommend turning right up to Colombes Street, and then left in order to get past the Raúl Goyenola football stadium, which features an important size. Next to it, the Municipal Velodrome welcomes local cyclists who wish to break records of speed.

This tour provides a broader vision of the magnitude of green spaces, architectural works, sculptures, statues and museums treasured by this beautiful Uruguayan city.

Print this outing
« Back to Outings in Tacuarembó