Its image is present in all local postcards. Its beauty and use make it unique and irresistible to every visitor to Carmelo.
The most beautiful things in life are free. 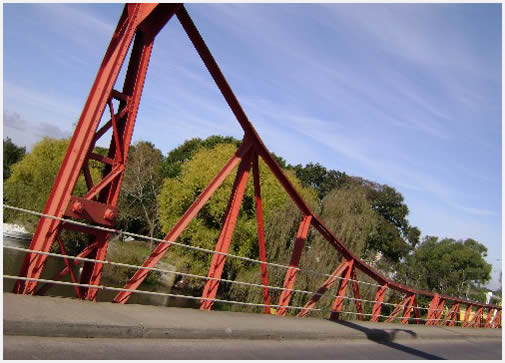 According to history books, it was on May 1st, 1912 that Las Vacas Stream was spanned by a bridge. The local dwellers had not even imagined such structure which would not cross the stream but also let deep draft boats through- could be built. But the dream came true.

The bridge became a part of the life of all the carmelitanos (as the inhabitants of Carmelo are referred to), who felt so proud of "the work", as some people still call it, that this invention had repercussions in the rest of the country. 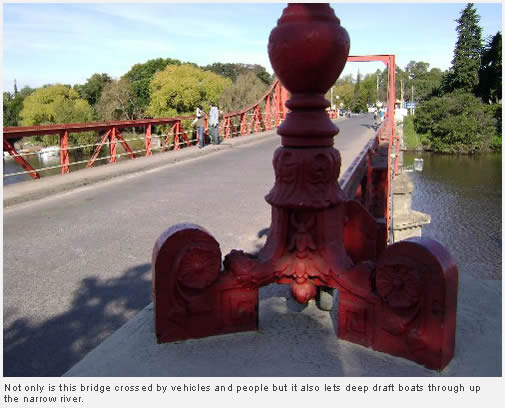 Everybody wanted to have one exactly like this, but it was not possible. And, in addition to being the first one in the country, the Carmelo bridge is the only structure whose movement is possible through human operation. Thus, even today, whenever the city is mentioned, the bridge is the first word associated with it.

Constituyentes Promenade was built by command of Carmelo's Female Patriotic Committee and inaugurated on December 7, 1930 as a commemoration of the hundredth anniversary of the Constitution. 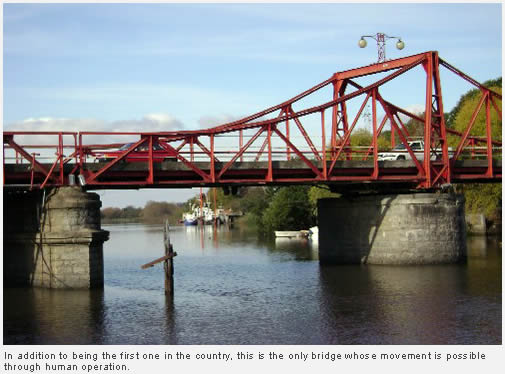 This is a pier which welcomes those visitors to Carmelo who come from the river, whether from the Cities of Montevideo, Colonia del Sacramento or Tigre, one of the so many ports in neighboring Buenos Aires (Argentina).

Featuring a promenade made up of terraces, gazebos, grapevines, sculptures and flowers which coincide with the Temptations Fountain, this public walk leads to the local port, to a monument raised to honor liberator José de San Martín. From this point onwards, visitors may catch a majestic sight of the swing bridge. Cars, bicycles, motorcycles and passers-by cross the bridge from one side to the other during the entire day and even sit on it to have some mate and watch the quietness of the waters in the sunset. 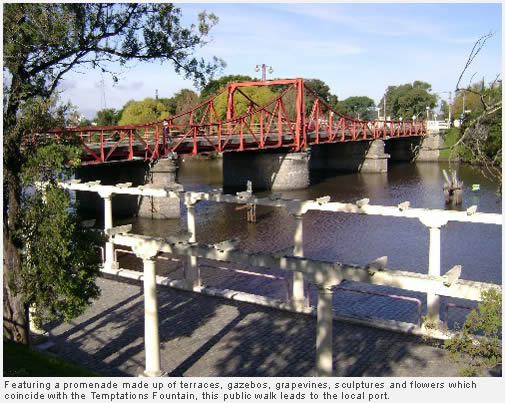 Once in a while, some large boat resolves to cross under the bridge and, after the local prefecture has been given notice of this fact, magic takes hold of the river, of men, of everything around. The central part of the bridge slides towards one side of the river in such a beautiful way that people stand on the waterfront to watch the show. They even clap sometimes.

Red and radiant during the day and impeccably lit in the night, its yellow lights and its brightness glow on the still waters of the stream. When there is a full moon, it also crosses the bridges just like children and teenagers at Carmelo do once and again during the same day. 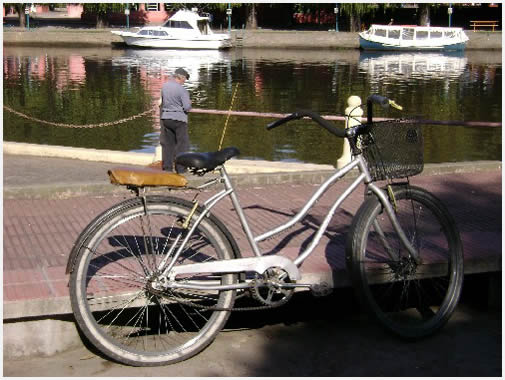 The City of Carmelo lies on one side of the bridge whereas its bathing resorts and beaches lie on the opposite side. The bridge is a link joining both parts and the moments in the day let people be on one side or the other. This is what makes it wonderful.

« Back to Outings in Carmelo