Around La Pedrera on Foot

Rumor has it that the best way to get to know a place is by walking around it. And when it comes to La Pedrera, the rumor is true. Walking around this pretty Uruguayan town is a must. 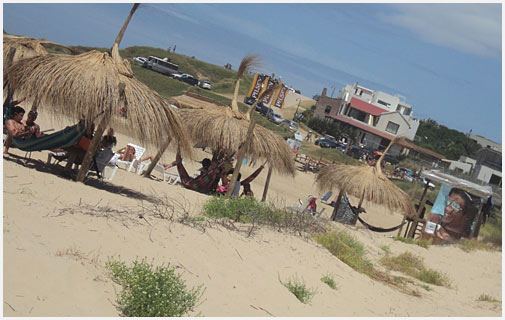 Years ago, the swim hole known as La Pedrera became one of the favorite destinations among those who choose to spend their vacations in Uruguay. There are more than enough reasons.

The diversity of its beaches, including quiet waters, waves and even special spots for surfers, is combined with its huge rocks and a village nestled inside the woods whose vegetation gives off color and aroma at every step.

Of course that talking about La Pedrera necessarily implies mentioning its main street, which starts at the access of town, in the road, and ends in front of a huge cliff over the sea. Both during the daytime and in the evenings, the busiest commercial activity of this place is concentrated on this artery, which is turned into a pedestrian promenade at sunset for vacationers to enjoy. 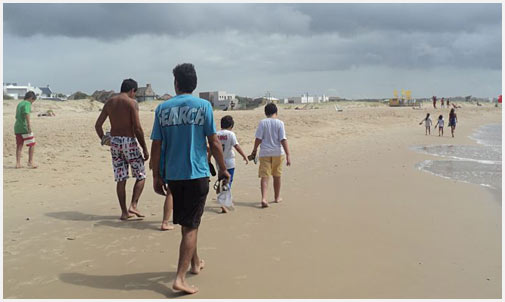 At around 8pm, the people walking up and down this street are an excellent representation of the spirit of La Pedrera. Couples with babies start to choose a nice place to have dinner. Barefooted teenagers and young people still in their bathing suits eat yogurt or have some milk as some parents go shopping for supplies. At some bars or tea houses, others finish their snacks as they watch the constant movement all around. 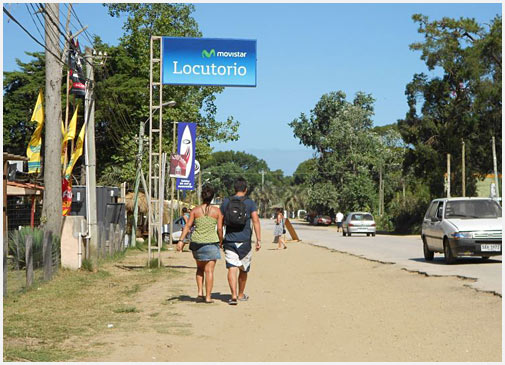 The buildings on the pedestrian road are also very diverse. In addition to the stores where supplies are bought, a great deal of pubs that serve promising menus spiced up with music and guarantee enjoyment at night also stand out.

The store offer is completed by surfing gear, pizza restaurants which also sell empanadas and even an old church right opposite the police station. 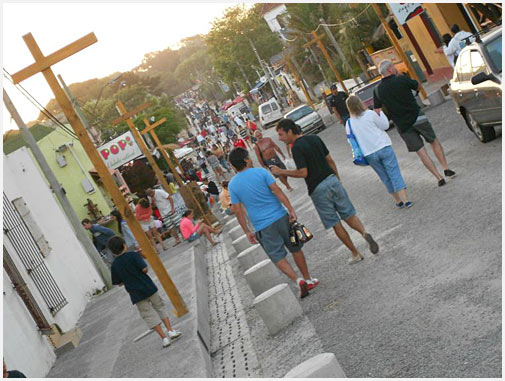 The mixture also includes Club Social La Pedrera, which displays its global proposal on large chalk boards on the sidewalk, just like in the old days: cinema for children (and the rest of the family) at 10pm and festival for grown-ups after midnight.

In the meantime, a few meters away from the club, a group of youths unveils its fabrics and teaches aerial silk to children who dare to jump and climb.

Once the night has fallen, the pedestrian road becomes the territory of young people searching for music, dancing and amusement, a mission that will demand several hours. So many that they will witness the moment when the first sunbeams appear on the cliff at the end of the road as they announce a new day has come at this Uruguayan town second to none. 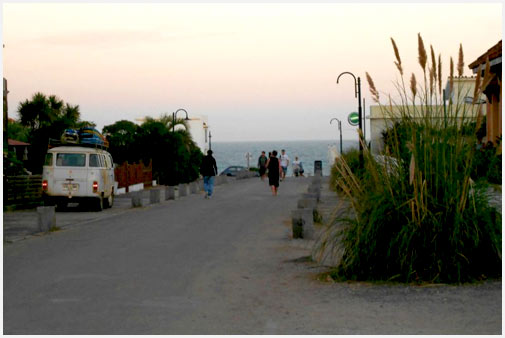 Print this outing
« Back to Outings in La Pedrera