Visiting this place is fascinating. Behind its porticos, each stall display delicious meat, achuras and pamplonas. Outside, candombe and handicrafts. What else is needed? 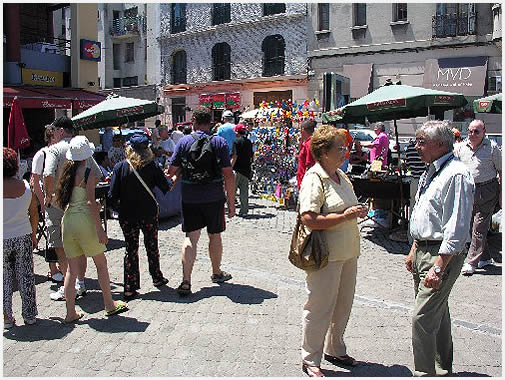 This is an old-fashioned market. There is no doubt about it. Just visiting its outdoor area and surrounding its venue, we can realize we are in the Ciudad Vieja (Old City), a few meters away from the port of Montevideo.

Inaugurated in October 10, 1868, both the English and the Montevidean newspapers from those days referred to the size of the works managed by the Spanish businessman Pedro Sáenz de Zumarán and a group of Uruguayan entrepreneurs.

Its construction, in the English style, was carried out at the Union Foundry workshops in Liverpool. Such professionalism was also seen in the assembling of the venue, a process in which professionals from England took part.

The European architecture takes us back to those days in which everything was auctioned inside. Vegetables, fruit and meat coming from the inland areas, as well as African slaves and other illegal imports from old Europe, were sold there. 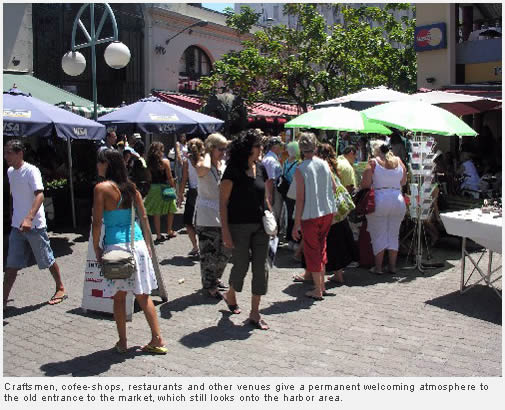 Fortunately, times have changed. Today the market has been completely renovated. Entirely different, it is very healthy and that is evidenced by the number of people who wish to visit it after having heard about its fame, beauty and, obviously, its meat.

It is inside the same yesteryear context, where craftsmen, coffee-shops, restaurants and other venues give a permanent welcoming atmosphere to its old entrance, which still looks onto the harbor area.

Thousands of visitors tour around the market everyday searching for antiques and souvenirs, traditional clothes and leather items, though the steak houses are the greatest local attraction.

For decades, it has been a tradition to have lunch at the Port Market on Saturdays. Visitors may have a snack at a bar or sit on a comfortable chair to have a relaxed lunch. 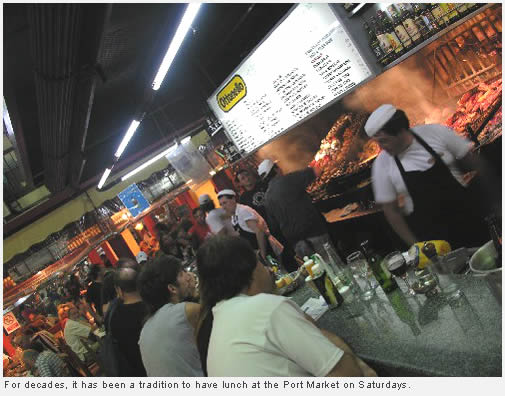 The smoke, which takes hold of the market and its surroundings at midday, is clear evidence of what happens inside the venue. And there is no one who can resist such temptation. Taxi, to the port, is the phrase heard by almost every Uruguayan taxi driver when the clock strikes noon.

The best samples of Uruguayan cuisine, from chivito al plato (a steak with ham, cheese, tomato, lettuce, and mayonnaise) or a la canadiense (the same steak in a sandwich version) up to the best and most simple meat cuts, achuras (offal), asado (grilled meat), chicken, matambres (stuffed meat rolls), chotos (plaited intestines), pamplonas (grilled stuffed-meat) and other delicacies very popular in these corner of the world await for customers. 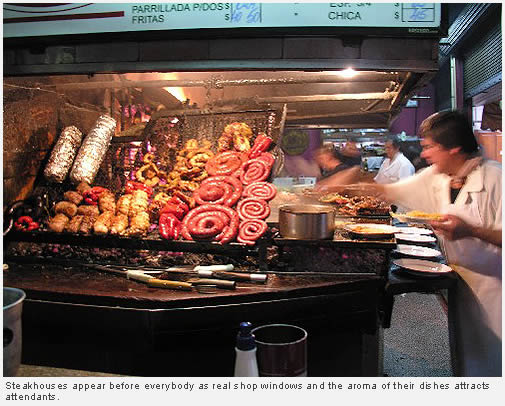 Foreign tourists are astonished at the beauty with which the dishes are presented. Steakhouses appear before everybody as real shop windows displaying their meats and other delicacies at popular prices instead of clothes, jeans or handbags.

The adrenaline present inside, where waiters and cooks make their best to assist everybody in due time and proper form, happens in few places around the world. Here, it occurs naturally as soon as the clock strikes 12 and appetite appears. Outside, there is always a group of youngsters who display their dance movements and the sound of the Afro-Uruguayan candombe, a tradition that can change any lunch or dinner meeting into an unforgettable party. 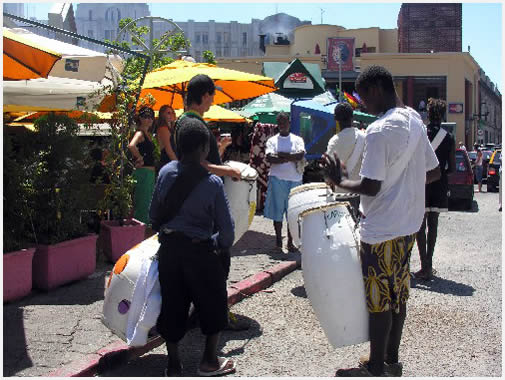 Both the restaurants and the stands inside the market offer visitors excellent cuisine at very accessible prices. Anyway, it is recommended to pay in Uruguayan currency to avoid any inconveniences at the time of changing money, which must be always done at banks or authorized entities, and never in the street.