We visited the old cemetery of Paysandú, currently a National Historical Monument. Another way of knowing part of the history of the city. 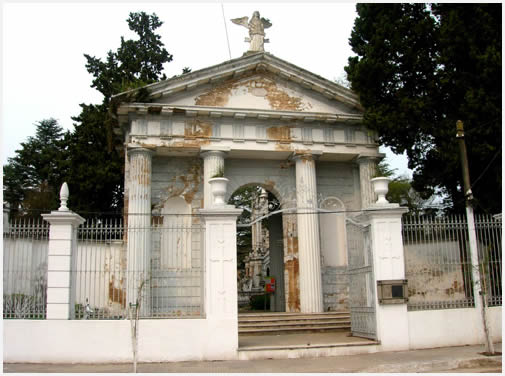 A Greek/Roman portico quite cunningly catches our attention. The Corinthian columns hold the heavy capital in which the shape of an angel seems to welcome us. The place looks gloomy and yet solemn. When we walked into the premises in silence we could only hear the sound of our footsteps on the small stones on the way and the gurgling sound of the doves that dwell there.

It is the old cemetery of Paysandú, today National Historical Monument because of the quality of what is inside it. Known by the residents as the "Perpetuity Monument it houses works of art and architectural constructions. 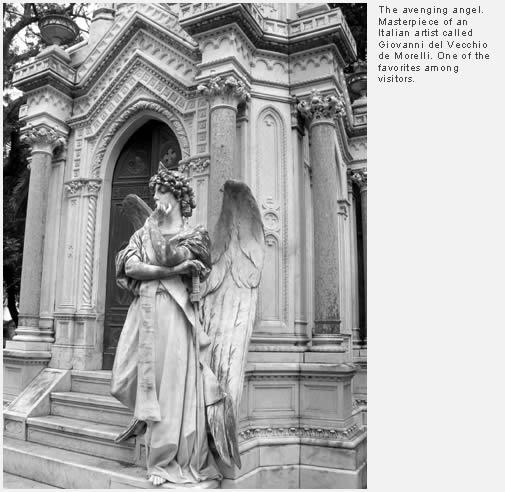 The magnificent sculptures are real art and worship mausoleums among which those owned by the Sriling family and by General Francia are the most outstanding. These works of art were sculptured by artists like Giovanni del Vecchio de Morelli and José Livi. This kind of expression does not exist anywhere else. When touring around the venue, we can appreciate the Carrara marble angels, saints and lions surrounded by burial niches and tombs.

The chapel was built in 1859 by Francisco Poncini. Its simplicity is reminiscent of the rural areas of the country.
The mortal remains of philanthropists, scientists, ranchers and teachers who forged Paysandú as we know it today rest in this site. There are also the sepulchers of the fallen in the Paysandú defense battles during the siege and defeat of the city by General Flores troops and the Brazilians in the well-known Liberating Crusade that took place in December 1864 and January 1865. 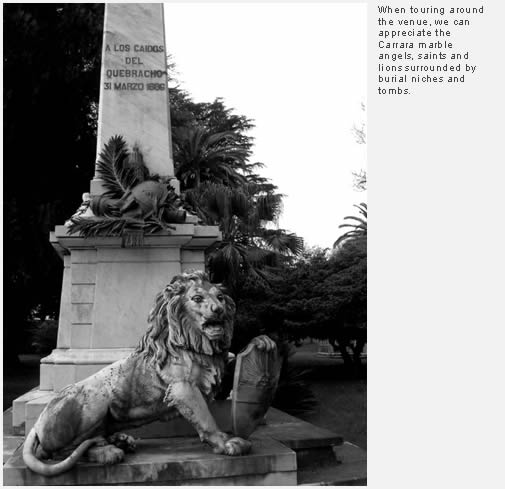 It is quite shocking to see the frozen statues that seem to want to talk to us, to say something in particular, even though, deep down, we know that it is just a figment of our imagination.
The details on the tombs of controversial characters that lived in Paysandú give evidence of some signs of Freemasonry. As can be expected, the Catholic stamp is also sprinkled all over the premises.

Everything is quietness. The rest of the visitors seem to move in slow motion. Some dare to murmur but most of them remain astonished by the bronze and marble masterpieces that make the past full of glory and prosperity immortal. During your stay in Paysandú, we hope you can see the perpetuity monument. There is no doubt that it is worth a visit.

The perpetuity monument is located on Montecaseros Street between Artigas Street and Soriano Avenue.

When visiting the premises, we suggest asking for a guided tour to understand the magnitude of what you are seeing.

« Back to Outings in Paysandú