A Live Museum at Hotel Argentino

Hotel Argentino is an ideal space to be enjoyed by vacationers in the area who resolve to take a tour in the surroundings. A ride second to none. 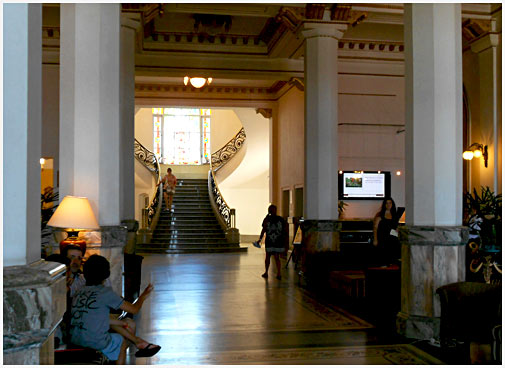 Hotel Argentino in the City of Piriápolis is a wonderful piece of architecture and a perfect site to stay and enjoy the stately rooms and the imposing view of the Sugar Loaf on one side and the promenade and the vastness of the sea on the other.

However, at present the hotel is also a space for all vacationers in the area to enjoy and visit. The first floor might be considered a historical museum that unveils the summer customs in the early and middle twentieth century.

Upon entering the venue going up the stairs facing the beach, visitors realize that they are going into a magnificent construction. This feeling is confirmed once the gate is crossed and the impeccable floor tiles, the very high ceilings, the openings and ironworks are appreciated. 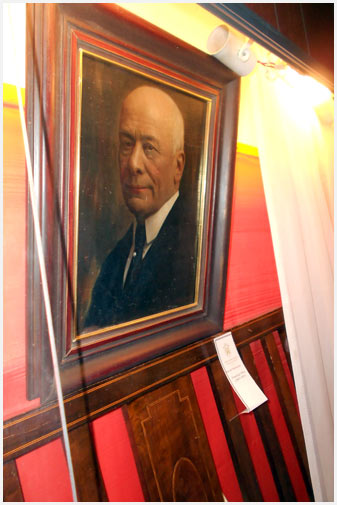 A spectacular staircase invites everyone to go up to the rooms and a stained glass window measuring approximately five square meters and featuring countless iridescent colors dazzles all viewers.

The two tea-rooms stand out at this incredible first floor. They stand to both sides of the entrance and their huge windows display the sea activities. The walls of one of these rooms features thrilling portraits of Uruguayan celebrities, such as comedian Ricardo Espalter and singer Lágrima Ríos, to name a couple. 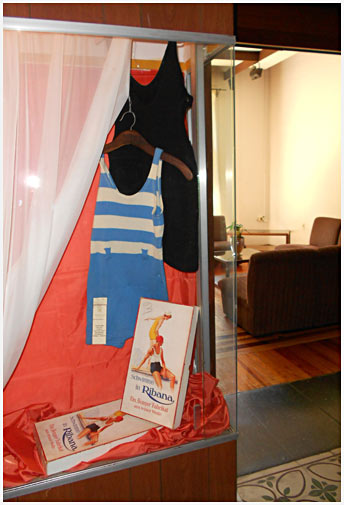 The original dining-room at the hotel is a huge space. The tables, tablecloths and counters take us back to 1930, when the building was inaugurated.

But the journey back in time had only just begun. While touring around the galleries that open up to both sides of the first floor, right before reaching the staircase, the tracks of time are replaced by the presence of the labels of exclusive wines used in 1935, postcards from those days, the ledger or the guest registration book used during the first year of the hotel. All of these items are displayed in glass cabinets along with the original manuscripts written by Mr. Francisco Piria about his utopian socialist ideas. Besides, two male bathing suit models stand out in the show. Designed in Germany, they resemble the one-piece suits worn by women today. 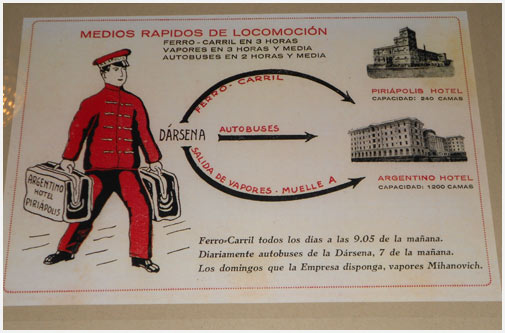 The walls of the gallery that leads to Casino de Piriápolis (obviously located inside this magnificent venue) boast remarkable photographs of former times that give evidence of the dancing nights, the tourists on the beach, the cooks at work in the kitchen and countless posters that advertised the city and the hotel as lying just a few hours away from Montevideo.

Not only do all these pieces show the advertising language from the early twentieth-century but they also speak about the pride felt for the hotel, its amenities and services in this part of the world.

The casino, immortalized in several photographs of the hotel, is also very attractive. It features large windows and lamps hanging from the ceiling, along with beautiful chips guests and visitors dream of winning. 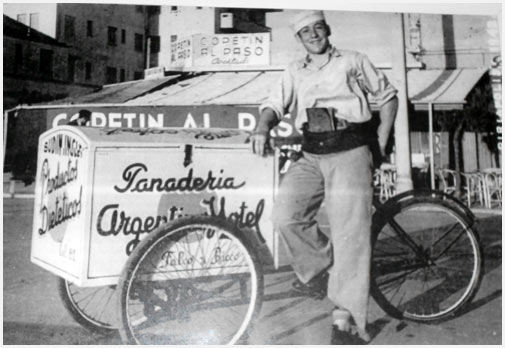