The Christopher Colombus Monument standing in Independencia Square preserves documents for future generations. A real legacy everyone should know about. 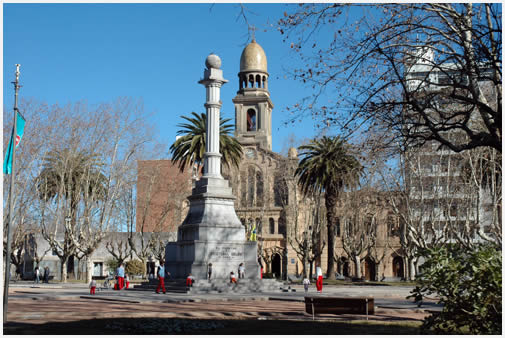 Maybe this should not be considered a tour, but we deem it important to highlight the presence of a monument which was raised in the middle of Independence Square in order to pay tribute to Christopher Colombus.

This particular monument was made by the immigrants in 1892, when a new anniversary of the arrival of Colombus in America was being celebrated. The work was completed as a result of the joint effort made by the neighbors of the village who had this innovative idea while thinking about leaving their legacy for the future generations. It is important to pay attention to the details on the monument and to learn about its history and formation so that it does not go unnoticed like just another monolith in a square. 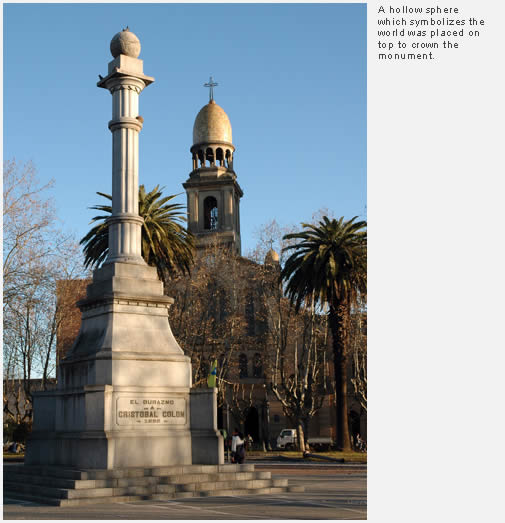 It was 1892 and, in commemoration of the IV Centennial of the discovery of America, a festival committee was formed. It was made up by Italian, Spanish, Argentinian and Brazilian immigrants as well as Uruguayan citizens, of course, who resolved to raise a monument to honor the great sailor. For such purpose, a 14-meter-tall column made of granite brought from San Borja was raised. A hollow sphere which symbolizes the world was placed on top to crown the monument. Inside the sphere, there is a brass box containing documents about life in the City of Durazno in the late XIX century, which should be opened a hundred years later. Scrolls, diplomas, medals and show guides were included in order to give evidence of the degree of culture the dwellers of Durazno have.

And so it was how in October 1992, expectations filled the city. A public ceremony was attended by all citizens. Speculations about the content and the existence of the box generated myths which were dispelled at the moment of opening the sphere. 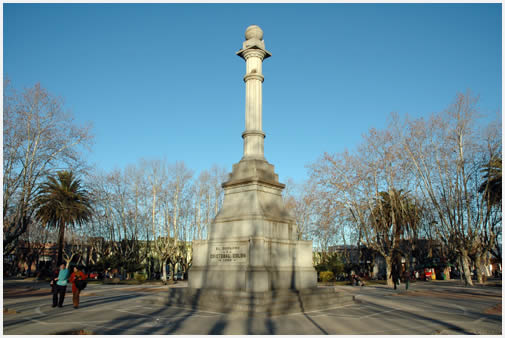 The surprise was contagious: the box existed and was intact. The message written by the ancestors was read with great thrill and the objects contained in the box were revealed and then displayed in the Casa de Rivera Historical Museum, right opposite the square.

Afterwards, in order to continue with tradition, it was the duty of the dwellers of Durazno in 1992 to leave their own message and legacy for the citizens of 2092. This is how this monument, which became a time ship, lodged the new documents inside. In this opportunity, gold, silver and bronze medals, as well as currency, maps, stamps, books and even a hard disk provided by IBM Uruguay which contains photographs and statistics in general, were included inside the sphere.

Today, this block of granite is the pride of Durazno and it will be protected with great expectations until the right time comes for it to be opened once again. 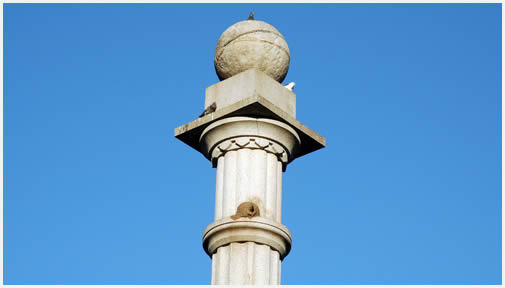 The monument lies in the center of Independencia Square in Durazno.

« Back to Outings in Durazno