Between the Past and the Present

We toured around the Old City and we saw the origins of Montevideo. A walk into the past in which the political and economic center of the country can be seen. 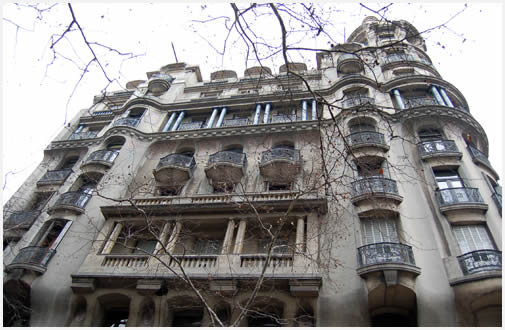 The City of Montevideo was founded between 1724 and 1726 by Bruno Mauricio de Zabala. It is a port city by nature that faces the Río de la Plata with tree covered avenues, quiet neighborhood streets, several squares and parks which turn this into a wonderful place to visit.

The epicenter of its cultural life is located in the so-called Old City, a place where the past and the present coexist among historical buildings, bookstores and the busy city life. In order to discover this important tourist sector of the city, visitors need to be curious and willing to walk.

Our tour began at the port of the city where we were at the shelter of the big Bay of Montevideo. In the background, different hues of grey buildings of various styles indicate that it is the beginning of the old city that witnessed the birth of Uruguay. 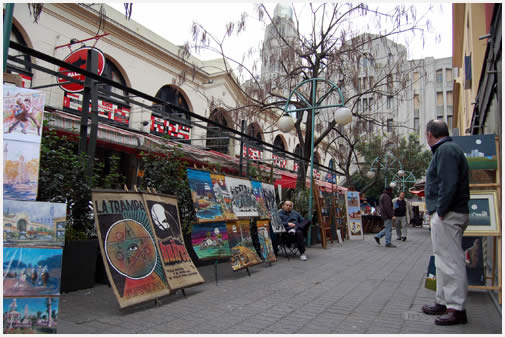 Opposite the port is one of the places identifying this part of town: The Port Market . Every day there is a feast for the senses among the grilled delicatessen and the tunes played by guitars, bandoneones and candombe drums.

After leaving the market, turn right into one of the many little streets leading to the heart of the city. When touring the Old City, colonial, Baroque and classical buildings of great architecture and patrimonial value can be found. In the beginning, this was a residential area but, as time went by, it was filled with offices and businesses and it became the financial center of the country.

Visiting the city takes us back in time and visitors can feel an old and yet cozy style. The façade of each building deserves hours of contemplation. There is no doubt the bricklayers of the time were true artists with their trowels and spatulas. 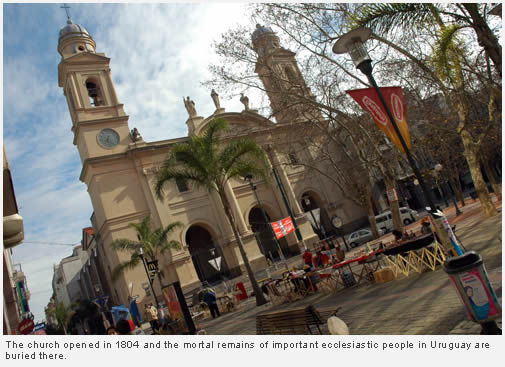 We soon passed by Zabala Square. In its center, there is a bronze monument in honor of the founder of Montevideo. Its design is a clear example of the Parisian influence since the work was inspired by the European "city-gardens".

A few blocks away, there stands Constitución Square, where two buildings raised in the year the city was founded can be seen: the Cabildo and the Metropolitan Basilica. The former was built in 1804 and it was home to the seat of the government, the prison, the court of justice, the police station and the parliament. The church opened the same year and the mortal remains of important ecclesiastic people in Uruguay are buried there.

The walk leads to Sarandí Pedestrian Street. Most of the art galleries are concentrated there and the street craftsmen are gathered to display their products. Music shows, open workshops and a true flea market can be visited while touring along this important artery. 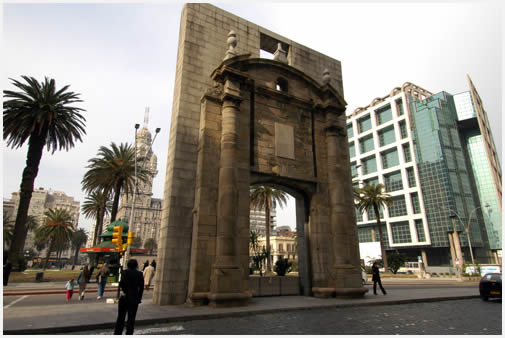 An old wall attracts peoples attention because it represents the beginning and end of the Old City. It is the city portezuelo, located opposite Independence Square. This huge wall has a gate in the center which allows visitors to get a glimpse of both sides of the city. On one side the modern city can be seen with important buildings 20 stories high while the other side invites you to walk and discover the beautiful architecture of colonial Montevideo with the nostalgia of the Old City.

We invite you to see the origin of the City of Montevideo through this walk. This place also offers museums, cultural centers and the Solís Theater where top of the line opera, classical music, dance, national comedy and the Philharmonic Orchestra of Montevideo can be enjoyed. The streets parallel to Sarandí Street are also part of the Old City and are worth visiting. 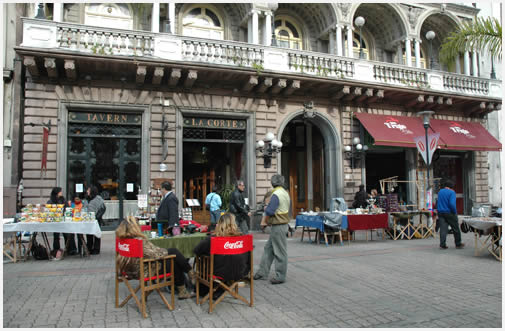 This tour can be done on foot. The starting point is the port or the portezuelo of the city located opposite Independence Square.